Bootstrap 3 vs Bootstrap 4: Should you move? What are the Differences? | DrupalExp - Premium Drupal Themes & Modules
0

Bootstrap 3 vs Bootstrap 4: Should you move? What are the Differences? 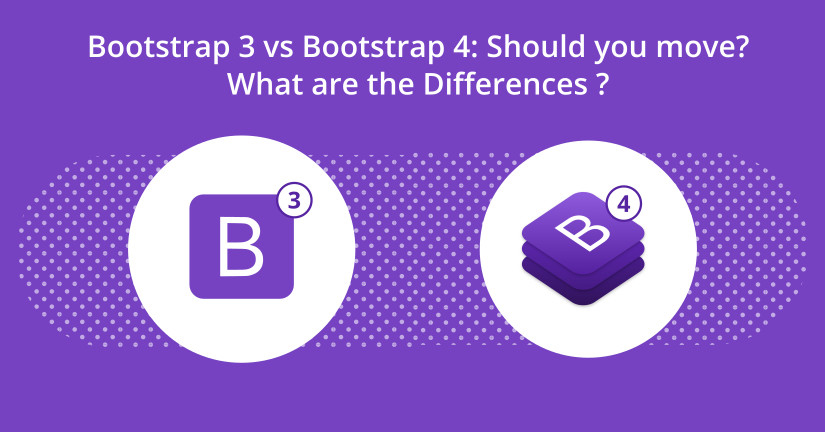 Bootstrap has been one of the most trusted front-end frameworks of all times. It has a loyal audience who has been sticking around from the very robust “mobile-first” release of all times, i.e., Bootstrap 3. This overwhelming release holds the responsibility of creating one of the strongest communities ever. It’s fairly understandable syntax makes it highly approachable. All it requires is the basic knowledge of HTML and CSS.

The last stable release was back in July 2016 with Bootstrap v3.3.7. And it’s release been that of Bootstrap 4.0.0 in August 2018. These data can very well justify the fact that Bootstrap has been putting in a lot of effort in terms of delivering the best possible results. If observed closely, one is definitely going to point out the fact that they have both of their versions available in the market. Although they have suspended work on Bootstrap 3 in order to intensify their work on the development of Bootstrap 4.

Still, the question remains unanswered, which we have come across through many google searches, i.e., “should I use bootstrap 4?’ or “should I learn bootstrap 3 or bootstrap 4 in 2017?”

These repetitive questions arise when one isn’t fully aware of the changes that have been brought from one version to another.

What has really changed in version 4? What it exclusively offers?

The latest Bootstrap 4 version got released after 2 years on 10th Aug 2017. Some might call it mostly a rewrite, but it does differ with its predecessors in many possible ways. Some of them are mentioned below;

In Bootstrap 4, Navigation component has been simplified to a great extent. One is required to create a new list of elements employing the latest nav base class. There are some recent additions like nav-link class, nav-item class and navigation bar styles also.

Although there is not any drastic change in the appearance. Yet, there are certain poignant changes like altered font implementation size, primary context colour, background colour. Moreover, Bootstrap 4 framework has stopped it’s shipping with Glyphicons. Hence, it is lightweight and also requires manual integration or some other alternative.

Bootstrap 3 had used Normalize.css in order to render all the HTML elements their consistent appearance. Bootstrap 4 adopted an enhanced version of Normalize.css i.e., Reboot.

Bootstrap 4 positions a lot of emphasis on customization. Hence, it’s new grid tier system lets the version 4 enjoy the presence of up to 5 grid tiers. One can easily say that Bootstrap 4 provides access to an improved grid system.

Flexbox is one such layout model that permits the formation of complex layouts with ease. It can be used in order to scale elements or apply advanced alignment capabilities, horizontal as well as vertical. It does not replace the already existing page layout. Bootstrap 4’s major step towards improvement is its movement towards adopting Flexbox.

Bootstrap 4 offers an improved form control. It enables to deal with the inconsistent input control and its appearance on different browsers. It provides custom forms too, in the form of custom checkboxes and radio inputs.

In the version 4, dropdown item class needs to be applied to every dropdown item. In fact, the caret symbol is intuitively added to dropdown toggles that have been added using drop-down toggle class.

In Bootstrap 3, a pagination component was created by applying the pagination class to any ul element. Now, Bootstrap 4 demands one to properly indicate pagination and link items using page-item as well as page-link class.

As in Bootstrap 3, plugins were divided into two categories, namely, a file including style rules and a Javascript file. There aren’t any poignant changes as to how the plugins are compiled in Bootstrap 4 either. In the latest version, style rules are composed using SASS. Whereas, plugins are available under global jQuery object as Javascript file contains a jQuery section.

Bootstrap 4 offers its immense support to all the major and renowned browsers of all times, like, Safari, Chrome, Opera and Internet Explorer (i8, and above) etc.

In Bootstrap 4, new utility classes have been included without hampering any existing functionality, whatsoever. Such important additions are as that of responsive text alignment classes, responsive floats, and responsive embedding. Apart from offering many shortcuts, these, respectively, allow for changing the alignment of the text, floating of the elements and the scaling of the aspect ratio of any embedded media.

Upper hand in using Bootstrap 4 over 3 or Downside?

In the section above, we have talked about the features that Bootstrap 4 exclusively offers. Hence, in order to settle down this raging conflict, we have to pick one. In this Bootstrap 3 vs Bootstrap 4, we need to declare one’s superiority over the other.

With these above-specified benefits that Bootstrap 4 caters, one can get inclined towards this version than the previous one.

All of our Drupal 8 themes is build with Bootstrap 4 with amazing DrupalExp framework.